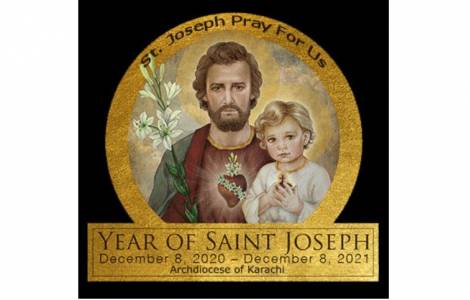 Pope Francis has dedicated this year to St. Joseph, under the title “Patris Corde”: With a Father’s Heart. He concluded this letter stating that its aim was to

This is a particularly poignant theme as we know that Joseph was Jesus’ step-father; not his actual father – but he was a father to him nonetheless. This reminds us that all family life (in whatever form that takes) is sacred. Due to this reason, amongst many others, Joseph is the patron saint of families. He knows the joys, and the struggles, of what it means to be a family.

Along with our diocese, we lifted up our hearts in prayer with a Novena to St. Joseph. This 9-day period of prayer ended in advance of St. Joseph’s feast day on the 19th March.

You could start your own Novena to St. Joesph any time and also say the prayer below daily:

Watch over me and care for me

Just as you cared for the child Jesus;

And, by your help,

May I come to know your Son and grow

And the favour of God.

St. Joseph, pray for us.

Here is the link to the booklet about St Joseph from Westminster Diocese.

“So when I have a problem, a difficulty, I write a little note and I put it underneath Saint Joseph, so that he can dream about it! In other words I tell him: pray for this problem!”

“But when he had considered this, behold, an angel of the Lord appeared to him in a dream, saying, ‘Joseph, son of David, do not be afraid to take Mary as your wife; for the Child who has been conceived in her is of the Holy Spirit. She will bear a Son; and you shall call His name Jesus, for He will save His people from their sins.’” ~Matthew 1:20-21

On January 16, 2015, Pope Francis gave a speech in the Philippines about his love for St. Joseph. He described his special devotion to the sleeping St. Joseph. You can read about St. Joseph’s dreams in Matthew 1:18-25 and 2:13-14.

Here are a few selected quotes:

To celebrate the fifth anniversary of Pope Francis’ apostolic exhortation, Amoris Laetitia, on the pastoral care of families, Pope Francis called for a Year of the Family from 19th March 2021 – 26th June 2022.